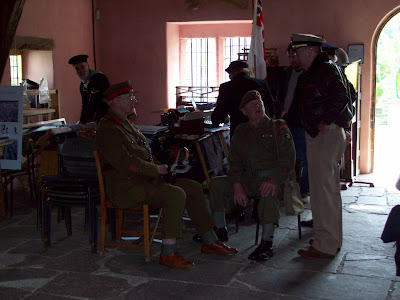 World War 2 Fortnight has been excellent, we have had loads of visitors to the museum. The re-enactors have really made a 1940's atmosphere. We have had visitors from the Royal Navy, Home Guard, British Airborne, Women's Land Army (two ladies who were in the Land Army during the war) and many more. The school parties that have come to visit us have all been dressed as evacuees and have experienced air-raids and cooking on wartime rations.

Johnny Victory on Sunday 7th June was excellent, singing to 1940's tunes. The re-enactors gave a talk on the V1 flying bomb in the Manor House, and underwent an air-raid. Luckily, everyone survived the attack and celebrated with singing classics such as;Pack Up Your Troubles, White Cliffs of Dover and Tipperary.