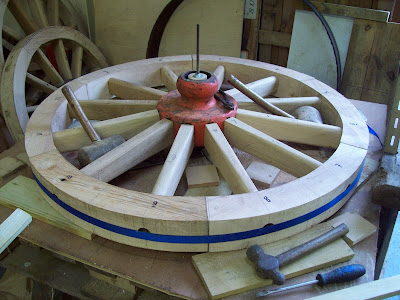 Volunteers and staff at the museum have been busy recently making some reproduction cart wheels for the Marshall thresher.

This You Tube video shows the process of putting the iron hoop on the wheel in an episode of the B.B.C series Victorian Farm.

C.Gough
Posted by Unknown at 14:40 No comments:

Museum Volunteers Robin Butler and Peter Smith share their memories of wartime treasure hunting. Silk parachutes and unexploded parachute flares could be of great value to a wartime youth.

C.Gough
Posted by Unknown at 14:29 No comments:

Further war time memories from museum volunteer Peter Smith. Peter was evacuated from London during the Second World War. Click the play button to hear his memories of sneaking back to London during wartime.


Carrie
Posted by Unknown at 14:16 No comments:

Love Tokens From The Harrison Collection

Carrie Gough
Posted by Unknown at 15:05 No comments:

We raked in the Lyke Wake Walk sponsor money...

You may remember I completed the Lyke Wake Walk in August 2009, well today I got the sponsor money to the museum and the grand total was £220.50. Thanks for sponsoring me folks, the money will help with the Harrison Collection project at the museum.

Just one day to the official, 'FLIPPING HEARTS WEEK!! '
I am so excited and really want this to work, as my colleagues have helped me so much. I am pleased to say that the things I want in the week to happen, so far have.
I have all the biscuits ready for decorating and all the activities set out and just need to wait for the day to come.

I will be asking someone to take some pictures as i can then put the on the blog and you can have a look at all the different things that went on.

Hope you will enjoy this next blog as i will, i will write one for each different day as i am doing something different myself.
See you soon :)
Posted by Unknown at 15:18 No comments:

Pigs at the Museum - Hamish and his Girls.

Hamish the boar is living happily at Ryedale Folk Museum, with his lady friends.

I have had another busy week. As I keep saying everyday is totally different. At the start of the week I was with Helen working in the stores. We were sorting out different types of collections and restored them. (That was pretty tiring!). We got through it though.

On Tuesday me, Mike and David went to a conference in York. I found this day really useful because it is interesting to know what different opportunities we are giving to young people. It was also a great opportunity to meet new people and network with each other.

On Thursday it was quiet in the office. I helped Barbara in the office. I also did a bit of front of house. Also the photographer came and took pictures of me and David in Stang End. I also helped Helen in the stores.

Today another photographer came and this time David was pretending to flip a pancake. (the pancake was made out of cardboard!!!)

Emma. Young Apprentice
Posted by Unknown at 11:48 No comments:

This month the museum and Gallery is hosting an exhibition of work from students at Yorkshire Coast college in Scarborough. The work is on display all round the museum and gallery. Work by students at the college was inspired by visits to the museum as part of their course. To get a taste of what's on display and to learn more about the project watch the video below:

C.Gough
Posted by Unknown at 16:09 No comments: 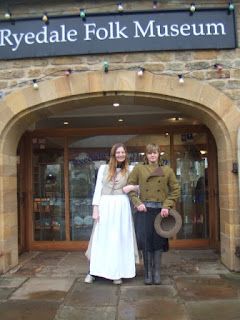 At 1:15 pm, Emma and I got changed into a costume of our choice (MEDIEVAL), and by then a photographer for the local newspaper had come to the museum.

- Here is a picture of our costumes.
We had great fun and our picture will be on the Gazeet & Hearald :)

Well you wake up at 6:45 to be at the station in York for 8:30 you then buy a *Starbuck's Coffee Cappuccino, and a Caramel Hot Chocolate* Yumm!!! - Best way to warm yourself up in the morning.
I was then picked up by Bex who admittedly abit late, but who can blame her. The traffic in York is horrendous!!!
I was picked up and we left straight away, with a few idiots driving on the motorways we finley got to the turn off for the Industrial Estates, we made our move.
After allot of knocking down doors we found correct directions to the studios, we told who we were and why we were there.
They then gave me a script of everything I had to say and I read it out loud for the first couple of times to myself.
We then thought I was good enough, to do a real test/ run through.
Here is a version of me doing a trial recording preview.

I found that concentrating on the script was harder than it looked.

I really enjoyed my time though, and it was a great experience. I hope to do more in the following years to come.

Here is the final preview of my advert. It is a little dicey but the advert people said that they would cut out the bad parts and edit it and finnish it themselves.