The Manor House is currently housing a display of court dress worn by the Earl of Feversham (1906 - 1963).  The Earl served as Lord in Waiting at the courts of King George V and Edward VIII between the years 1934-1936 until Edward's abdication.

The Display has been put together by volunteers from the costume department at the Museum. 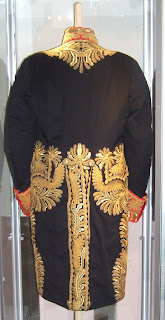 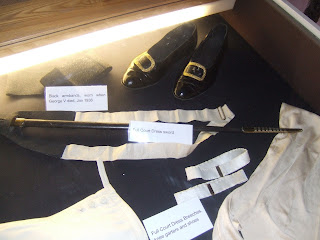 Here are some photos from the Fleece to Jumper Day we held last weekend:

Posted by Unknown at 11:12 No comments: Links to this post

From Fleece To Woolly Jumper

On 19th September we are having a demonstration on making a woolly jumper, please ring us for exact times.

http://cache.virtualtourist.com/1/1035329-Woolly_Jumper-Paris.jpg
http://www.organicpurewool.co.uk/fleece.html
Jonathan S
Posted by Unknown at 12:51 2 comments: Links to this post

Last week Mike and I travelled down to Birmingham for an Apprenticeship Conference.

In North Yorkshire it was traditional for taties to picked in autumn, generally in October. Half-term in October was traditionally known as Tatie Picking Holiday, as children often helped, lured by extra cash and free spuds to take home. It helped me buy my first computer back in 1986.

The video in this post shows how it was done in the 1950's, we are having a Potato Week in October 25th-October 29th with things to do and see for all the family.

Jonathan Severs
Posted by Unknown at 21:57 No comments: Links to this post

The 5th of September was Harvest Day at the museum.  A 1940s Massey Harris Sunshine Binder was in use in the cornfield.  Take a look at the pictures and video below:

CG (pics by Pete Gough)
Posted by Unknown at 13:21 No comments: Links to this post

No Name Re-enactors at the Museum

Take a look at the video and slideshow below to see some of the re-enactors in action.  The group represented Roman, Viking and Saxon ages.  Authentic cooking, wood turning, spinning, weaving and flint napping were all on display.

C.G
Posted by Unknown at 12:55 No comments: Links to this post

On Wednesday 1st September staff and volunteers hooped 3 wheels using traditional methods, following a successful wheel hoop earlier in the year.  The vintage binder (circa 1870) can now be fully restored.  There are two videos below of the days events.  The event was also attended by a master wheelwright Phillip Gregson and his two apprentices Charlotte and John.  Phillip had seen the previous wheel hoop video on youtube and came a long way to see the rest done!  Thanks to all who took part and spectated.

Its the last week of the summer holidays. Where has it gone?!

Considering the cold Bank Holiday we had quite a good couple of days. This was when Rosa Mundi - Medieval Re enactors, came to the Museum. It was great fun working when they were here. As mentioned the weather was terrible!!!

Also it is great to have the two new apprentices starting. Always good to have a couple pairs of extra hands. I know that they are both going to be fantastic.

Autumn is nearly upon us. Sunday 5th September is our Harvest day. So come on up for a memorable day.

See you all sometime.

Little Em
Posted by Unknown at 11:13 No comments: Links to this post